Selected as one of the “Top 50 Captains in the US” by Saltwater Sportsman Magazine in 2013
Outdoor Pursuits Director Fuzzy Davis was recently selected as one of Salt Water Sportsman’s Top 50 Charter Captains. In part, the article says, “Davis pioneered the area’s inshore fishing for tarpon, cobia and redfish guiding clients to the state’s first tarpon on fly and breaking the tarpon record. Davis also is the Outdoor Pursuits Director for The Ford Plantation in Georgia and hosts a daily radio fishing forecast.” Fuzzy says, “It’s a great honor for me, especially seeing the other captains that they selected.” Click here to read the story. Congratulations Fuzzy!

Featured in Palmetto Bluff Magazine
The Art of Fly Fishing

Broke SCʼs state tarpon record in 1986 and is still the current record!

Guided SCʼs first angler to a tarpon caught on fly 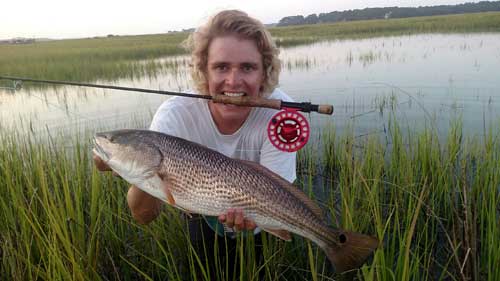 The latest fishing information from the expert.
Livestream Fuzzy's Fishin' Forcast with Monty Jett at 7:50 am Monday through Friday